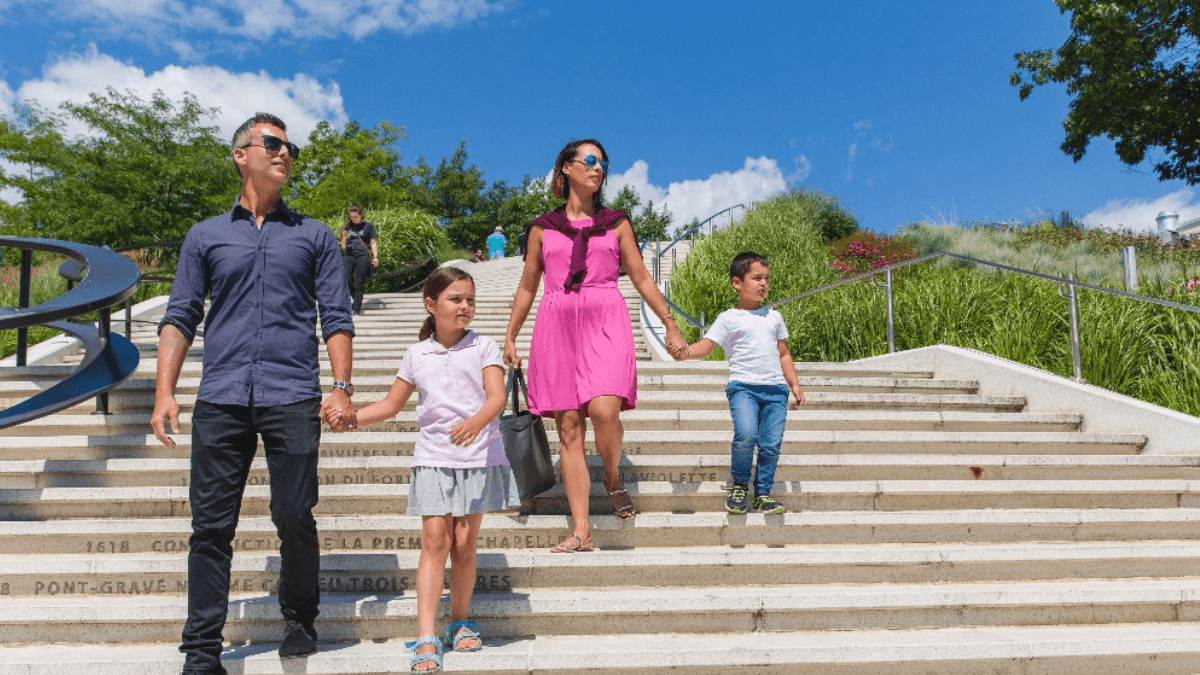 A look back at our stay in Quebec City in the family! The city that gave its name to the French-speaking province of Canada is a must! In addition, it differs enormously from its neighbor Montreal, with a much richer old city center!

What to do in Quebec with the family?

Museum of Civilizations to learn about Native American culture:

Very well known for its exhibition on Native Americans, this is not what caught our attention (this exhibition was closed to the chagrin of other visitors). Still, we have everything also had a great morning with the family.

Already when we were waiting in front of the doors (yes! get up very early and therefore first on the scene!), we were staying with young women straight out of Mad Max (sorry for the youngest, I don’t have any other references in this style). Mini Voyageur was intrigued: was it a disguise or a distinct rock look? They were extras for a photo casting which presented a future video game, Very unusual and very worrying for Mini Voyageur, who was very scared of the last addition, a real monster!

Despite all the advice I give you, like anticipating visits, I hadn’t planned anything for Quebec, and we didn’t know at all what exhibitions were presented!

See also  How to travel with a baby without a car seat: how to do it?

Temporary exhibition during our visit

And they’re a perfect surprise: an exhibition on video games! (Attention, temporary exhibition!)

Ideal for Mini Voyageuse (and her dad!) who had been weaned for three weeks from any screen! A great exhibition with all game consoles from the very beginning; with the game Ping Pong that we found on our computers when we were young (the thirties you must not have known, but there was also the 1st Sega console with Mario Bros)

And all these consoles were freely available, and we could play. Imagine a Mini Voyageuse and a Mr. Dad in a trance, who could show him what it was like “back in the days” of old people! 😉

After leaving this exhibition a good hour and a half later, head to the costume center (fortunately we had an appointment because otherwise, we would still be at the video exhibition) where there we have a lot laughed, disguising ourselves all as characters from a fairy tale (I only let you imagine our heads )!

Too funny, Mini Voyageur was entirely in the background, disguised as a knight. A very poetic and playful place! Enough to give strength to children!

Then, still in this same museum, a little game on Amerindian civilization and a visit to the science room for children, not very big, but very dense in experiments.

. Not many photos of the exhibition, because we were too busy testing everything!

Then while Mini Voyageuse went back to video games, we took a quick trip to the “California” exhibition, which was magical, but I was not focused, not reassured to leave my big girl alone in the room. To the side! I have also made several round trips! But the exhibition was worth it and, for us from the provinces, discovering California is always an event!

Admire the Cirque du Soleil as a family and for free!

That Mama’sCCaroline’stip from Globetrotteuse! She told us that a free Cirque du Soleil performance takes place every week during the summer! So neither one nor two, this performance was added to our evening program! Mini Voyageur seemed well rested from a long nap.

Caroline had warned us to go early because the free performance is viral! So 1h30 before the performance n, we are already queuing in the particular family queue!

Good children play with other children, get to know Czechs, and English a trip all by itself, this long wait! Thanks to the phones and tablets that come out of every backpack after a while.

After a long wait, the doors open! And there we ask families who have tickets to introduce themselves!

“hat tickets, but Innisfree!!! You

have to come in the afternoon to get free tickets!

See also  A Portable High Chair For Your Travels, Which One To Choose?

Oops, big fright, we are prevented from passing!… Mr. Dad, who was not keen to wait an hour and a half, gives me furious looks! I feel that the yelling will happen if we ddon’thave seats!

So there, Mini Voyageur attack! We change the stairway to go to the one where a young girl takes care of letting families through with my secret weapon: Mini Voyageur, my puppet still with her angelic smile! There, we say that we ddidn’tknow, that we have a minimal “look how cute he is, says hello to the lady, etc..”

And phew, no one has any more tickets, so we are allowed to pass! We will only be 7 to be able to enter! Thank you, Mini Traveler!

M.Papa finally savors the show; it must be said that it was superb, breathtaking! The children and the parents were speechless during the performance, which lasted an hour (I think)!

And on the way back, we took advantage of the sound and light broadcast every summer on the walls of the port buildings!

Splendid, but with the two children, we ddidn’tsee until the end Mini Voyageur ccouldn’thold on to his ddad’sshoulders at 11:30 p.m.! On the one hand, we knew that 3 hours of driving awaited us the next day and a nap in the car, iit’speace assured!